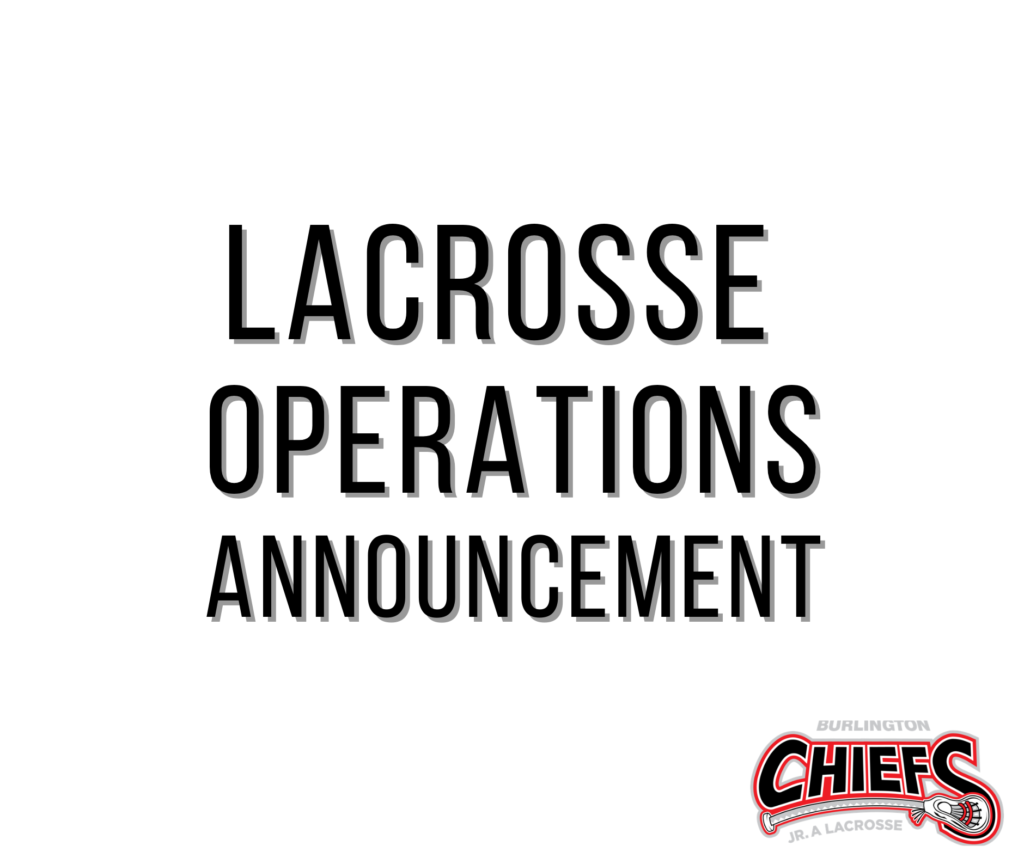 BURLINGTON, ONTARIO – The Burlington Chiefs Junior A Lacrosse Club are excited to announce the appointment of their top tier Lacrosse Operations team.

With fifteen years playing in the NLL while winning two championships, Paul is the current Captain of the Rochester Knighthawks. Paul has exemplified great dedication to the game and has won a Gold Medal at the World Championships, and two-time Heritage Cup Champion with Team Canada. In addition to his professional lacrosse career, Paul was the assistant coach of the Six Nations Jr A Arrows winning the Minto Cup, along with two Mann Cups as a player with the Six Nations Chiefs.

“I am thrilled to be coming back to the Burlington Chiefs, where I began my Junior A lacrosse career. I am excited to be involved with a great group of individuals in heading up this organization to help build on prior success’ and to continue in bringing this organization as a front runner in the OLA Jr A series.” – Paul Dawson

During his junior lacrosse days, Sean was Team Captain (1987-88) of the Bay Area Bengals Junior ‘A’ Lacrosse Team. Being a leader in the lacrosse community, Sean has dedicated over 20 years of his time to numerous Field, Box, and Pro Box lacrosse teams, and has been Assistant Coach of the 2017 NLL Champions, the Georgia Swarm for the last 6 seasons.

“After many years of Scouting, Coaching, Playing & Volunteering in the Burlington Chiefs Minor & Jr. A Lacrosse organizations, I’m honoured to begin a new journey as part of our newly formed Lacrosse Operations and Executive along with Paul Dawson, Mark Baldini, and Dan Dawson.

Co-Presidents, Bill Greer & Shawn Cardy have already commenced laying out the foundation on continuing to build upon our successful lacrosse franchise here in Burlington. I am really excited to be working with our group of Alumni, Coaches, Executive, Families, Players & Staff to share the many vast experiences on our journey to excellence, with the common goal of being the best Team together on and off the floor during these challenging times.” – Sean Ferris

“I am very excited to be joining this group of players, coaches, executives and staff. It’s a rare opportunity to be able to join such an experienced group that has a similar vision, common goals and the knowledge required to achieve. When you add that to a coaching staff and player pool with an established culture of success, it’s easy to be enthusiastic about what’s about to happen here.” – Mark Baldini

Dan Dawson has one of the most impressive resumes the sport of lacrosse has ever seen. Dan has played 18 seasons in the NLL and is currently one of the top offensive players for the Toronto Rock. Dan has amassed 526 goals, 910 assists, 1436 points and 297 games played in the NLL. Those totals have him ranked 3rd in points, 2nd in assists and 5th in goals in NLL history. Dan has been a winner at every level with 3 NLL Championships, 3 World Indoor Championships with Team Canada, 7 Mann Cup Championships, 3 Heritage Cup Championships, and 1 MLL Championship. Dan has been a major part of the growth of the sport in the Halton Region with years of experience running camps and clinics to grow the game and help lacrosse players at all age groups reach their potential.

“ I’m excited about the opportunity to work with the Jr. A players on a 1-1 basis. The entire coaching staff are people I’ve played with and against throughout my career and know they will do an incredible job.” – Dan Dawson

Statement form Co-President Bill Greer on the addition of the Lacrosse Operations Staff:

“Shawn and I are absolutely thrilled to announce the addition of four members to our Lacrosse Operations staff. One of our main goals was to fill our executive with incredible people who have a passion for winning, a great deal of experience in the game and a desire to give back to the Jr. A Chiefs franchise. Paul Dawson, Sean Ferris, Mark Baldini and Dan Dawson all bring a wealth of experience and different skill sets that will compliment each other and provide us with one of the most dynamic lacrosse operations teams in the league.” – Bill Greer, Co-President

If you would like more information about the team, please email pr@burlingtonchiefs.com.